Sport: "He Is Bolt" and He Is Home 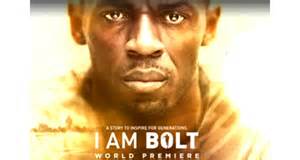 That was the retort from Jennifer Bolt (aka "Usain's mom) to this writer's rhetorical jab about the temperature difference between London, where she previously was, and Kingston's National Indoor Sports Centre, where we met last night, (along with a few hundred other luminaries) in honour of her illustrious son's latest project, the aptly titled "I Am Bolt" movie.

The solid gold Nissan GT-R parked outside gave way to more muted tones of black (even the carpet) and silver inside, with even the "Legend" opting for a crisp grey suit. Bolt brought directing brothers Benjamin and Gabe Turner (a more engaging yet similarly self-effacing pair to the Coens), who, like their subject,  chatted briefly with emcee Miss Kitty  before the"Feature Presentation". Prior to showtime, guests, including both the Prime Minister and leader of the Opposition, shunted between three main bars (a fourth sat n a specially roped-off VVIP area to the rear of the room, kinda like the Box seating at the local Cineplex). The ladies engaged in the customary practice of seeking to outdo each other in their dresses, while the men (expectedly) ranged from lounge suit to black-tie ensembles.

And the film? Mostly on point, and befitting the world-beating status of its star. After a visually provocative yet somewhat disorienting opening sequence (Nas??) the curtains were pulled back to show the champion gritting, sweating and - occasionally - partying it out on his way to sprinting immortality, in his by now well-known and inimitable style.

But he certainly has some help. Nowhere more so than from longtime "bonafide" and personal manager Nugent "NJ" Walker. Walker is what's known in showbiz as a "natural" inhabiting every frame he's given with relaxed self-assurance and honesty so as to make even Bolt look nervous by comparison. There is the "Sage" - coach Glen Mills, whose few words count as gold for both his charge and for the viewing audience.

One specially "golden moment" for this viewer: Bolt, in Germany for treatment to  his nagging hamstring issue, embraces renowned consulting sports physician Hans-Wilhem Muller-Wolfhart. Bolt speaks of "taking viewers on a journey" and in those few seconds of mutual backslapping heartfelt intensity and respect, we get a fuller sense of just how far he has actually come, on many different levels.

The film's own journey culminates, as expected,  in Rio, the place where a few months prior, Usain Bolt sealed his name not only among the Titans of his sport, but among the greatest athletes of all time, a view corroborated onscreen by no less a person than Brazilian soccer God Pele, who joined other other sports superstars such as Serena Williams, Neymar and Michael Johnson (whose long-standing 200m world record Bolt erased first in 2008 at Beijing, then the following year in Berlin).

Its a satisfying exercise, but for one item: the one-on-one fan interaction seemed, curiously, to be largely absent from this film. A notable exception comes in Cayman, where earlier this year bolt returned to active competition after a post-World Champs break. Peering trough a slat in a fence at the stadium, waving a Jamaican flag, a young boy gleefully shouts the name now known in every corner of the globe