That the genuine pleasures of listening to a New Roberto Magris record have remained consistently high over the course of umpteen albums, diverse personnel, locations and stylistic and thematic jaunts is, in itself the greatest recommendation that can be made.

Having recently (successfully) taken on Prague, Czech Republic, the composer pianist and bandleader  is once again Stateside - Miami, to be specific - this time at the helm of a sextet that includes Grammy-winning trumpeter Brian Lynch, bassist and WoodyHerman alum Chuck Bergeron, tenorist Johnathan Gomez and a "double beat attack" of South Florida's own John Yarling on drums and Murph Aucamp on congas/percussion. 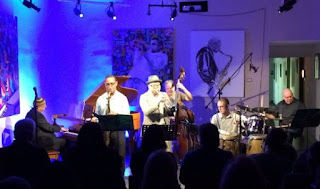 Its a rare non-studio recording for the Italian, this one going down at the Jazz Gallery at public radio station WDNA in Miami and, while Magris is good in any setting, this one arguably brings an even greater sense of renewal and freshness to his particular dynamics. Whether revisiting his own pieces, such as "Il Bello Di Jazz" and "African Mood" or reinterpreting notable compositions, like Billy Strayhorn's "A Flower Is  A Lovesome Thing" Magris brings his deft touch, gift for instant camaraderie and flat-out joy for the music and for playing, weaving in and out of various musical dialogues with his cohorts.

Whether the pace is propulsive, as on the Latin-flavoured "Chachanada" or gently fluid as on the Strayhorn tune or Magris' own "Blues For My Sleeping Baby" (which closes the programme), the band remains in high spirits and fleet-footed and responsive throughout, to the audible delight of the audience on hand. Lynch brings an expected gusto to his solos, complemented well by Gomez and bergeron - particularly on "Il Bello" shows the kind of thorough rhythmic sensibility that one might expect from a new Orleans native who also spent some time behind the drum set. Truthfully,  all the musicians shine and  compliment each other.

But it bears repeating: it's the spirit of Magris, the  great consensus builder, the well-travelled yet still wonder-filled journeyman whose joyful and compassionate outlook drive this set forward. Firm, but not rigid in his pianistic vision, he expands the aural experience for the listener by incorporating different themes and textures, in control but clearly enjoying the ride.
And you will too. Whether "Live In Miami 2017" is  your  introduction to a Magris performance on record, or you've heard him in his various iterations, this is a top-quality session that will definitely reward repeated listening.
Posted by Michael A. D. Edwards at 5:21 AM