Idris Ackamoor☥The Pyramids will celebrate their acclaimed new album on STRUT RECORDS, “AN 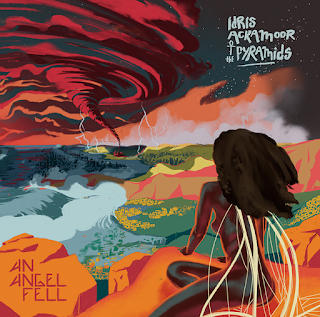 ANGEL FELL" with a Record Release Party & Concert THURSDAY andFRIDAY, MAY 24-25 at ZEBULON. The band will also perform music from their lauded 2016 release 'WE BE ALL AFRICANS”! All Music and Lyrics Composed and Arranged by Idris Ackamoor made possible by the Gerbode Foundation’s 2016 – 2017 Composers Commission for Award.

“AN ANGEL FELL” is the follow-up to the critically acclaimed 2016 release, “WE BE ALL AFRICANS” which was celebrated by NPR PUBLIC RADIO. “It's more like a Central African nightclub…or downtown Manhattan or Chicago's South Side in the late '60s and early '70s, where free-improvising saxophones met electronics and rock music and Sly Stone amid the urgency of the civil rights struggle.” “AN ANGEL FELL” has already been called a “MASTERPIECE” by Andrew Matmusic and “The new album is complete fire — right in the moment” by noted DJ Gilles Peterson.

“AN ANGEL FELL” is a “concept” album for the 21st Century with each track building on the other and unified by a common narrative. Produced, recorded, and mixed August 14 – 18, 2017 by Malcolm Catto at Quatermass Sound Lab, London, UK. Strut Records now once again brings the band together for another new side of intergalactic jazz funk, afro-beat grooves and hypnotic licks. “Like Fela and Sun Ra had a massive party and the whole world was invited. And everyone was blissed out and happy. All the time. Forever….”

THE PYRAMIDS was founded close to FIFTY YEARS AGO in 1972! Alto saxophonist Ackamoor had originally left his hometown of Chicago to study music at Antioch College, Yellow Springs, Ohio, where his teachers numbered legendary pianist Cecil Taylor. Via the Antioch Abroad Program, Ackamoor landed a year’s study overseas in 1972, which allowed him, and two Antioch students, to travel to Europe and Africa where he co — founded THE PYRAMIDS. The trip took in a musical spiritual journey up into Northern Ghana, the land of the Fra Fra of Bolgatanga and the Islam-influenced Dagomba in Tamale, where Ackamoor taped some field recordings. “We played with the King’s musicians in Tamale. I also undertook a healing ceremony in the bush of Bolgatanga with a Fra Fra traditional healer (a Juju Man).”
Posted by Michael A. D. Edwards at 8:31 AM