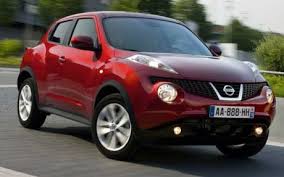 So, those who know this blog know we're more than a little immune to auto industry hype. Renault-owned (that's French if you were wondering) Japanese car maker Nissan has been quite active in this sphere of late, having developed somethign of a specialty for quirky named vehicles (Qashqai anyone?) and its overarching "SHIFT" camapign. The electro-hybrid compact leaf has gotten the lion's share of media attentio since its introduction, but in this region, its the SUV line that's grabbing headlines. The newest addition to that line is the appropriately catchy Juke. The 4-door crossover is surely an eye-catcher on the outside: rally-inspired headlights, and abold mix of curves and edges add up to a far-from-static curbside presence.

The design "tricks" continue inside, with a motorbike-inspired (think Ducati) bridge between the driver and passenger seats. Press the now obligatory START-STOP button and the driving experience begins in earnest. The Juke checks all the expected boxes with regard to handling, smoothness of acceleration, appropriate brake force response. Further, the creature comforts are decent and  the instrumentation meets the feng shui and usefulness demands.

A torrential downpour mitigated against certain aspects of our test drive  so the jury is still partially out, at best, on the Juke's SUV capabilities. And even though I didn't personally sit in the back, the rear leg room appears somewhat less than desired.

Still, the Nissan proposition is as much a value proposition as anything else. Just as its already "legendary" GT-R (the Hon. Usain is reportedly yet to truly push his special edition)has been providing a supercar-killer for about half the typical supercar price, so the Juke (essentially a Z-car reimagined) provides a neat entry point into the crossover segment. For a confessed "Bimmer-guy" like myself, this vehicle presumably would go up against theX1. Though I haven't (yet) driven that vehicle  - and must confess, it generally doesn't excite me - I cant imagine the Germans (BMW, Audi and Mercedes) being that superior in the driving dynamics category so as to justify the price gap.

So, what we have here from Nissan, through local dealers Fidelity Motors, is a practical starter vehicle that is nonetheless visually engaging and basically harmless fun to drive (good mileage too, of course). It will neither castrate the timid driver (apologies, ladies) nor lull the more demanding sort into a bored stupor.
This Juke's got a good steady beat.

Thanks to Fidelity Motors - David Crawford and the entire team - for providing the test vehicle.
Posted by Michael A. D. Edwards at 5:35 AM