Driving across the vast salt flats of Bolivia’s Salar de Uyuni is like gliding atop nothingness. All around stretches a bright white vastness of minerals that reach hundreds of feet down into the earth and spread out for thousands of miles. But if you’re a guest at Kachi Lodge, you won’t see any of it at first, because your eyes will be shut. 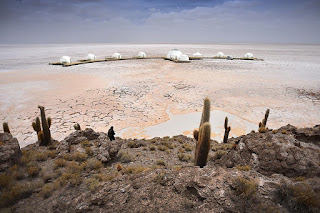 You might get a kick out of the thought that none of your friends will have done  this before. That’s because Kachi Lodge  is the first permanent property to open in this vast and largely undiscovered region. Opened just a few weeks ago, not far from the Tunupa Volcano and in the middle of absolutely nowhere, the adventurelodge follows its singular location’s lead, not only with activities that force you to experience its ethereal landscapes in totally foreign ways, but also with its six geodesic, habitable domes, otherworldly as they are and almost entirely clear to make sure your eyes are always on the scenery (except for when your guide instructs you otherwise, of course). 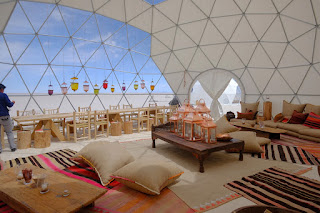 That your domicile is fairly bizarre is only appropriate in these parts. Inside, however, Kachi is quite luxurious, with cuisine by the chefs of Bolivia’s Gustu (a repeat winner on Latin America’s 50 Best Restaurants list) and original artwork by Gastón Ugalde (who hasbeen unironically called the Andean Warhol). And those strange bubbles are surprisingly a rather nice place to rest, too, draped in local textiles and stocked with Bolivian chocolate bars sprinkled with a pinch of crystalline white from the flats just outside.


e any adventure lodge worth its own salt, however, the most successful part of the experience takes place out in the wild, when you’re mountain biking across the flats, hiking up Kachi and Incahuasi islands, discovering 2,000-year-old mummies at Alcaya and, during wet season, sloshing through the water with your eyes closed. After you’ve made your way to the floating table, you’ll watch as the stars turn on one by one like a million little lights. Actually, make that two million—you’ll be standing on the world’s biggest mirror, after all.