Celebrity: "Some Parts Known": Anthony Bourdain's Stuff [Some] Goes on the Auction Block 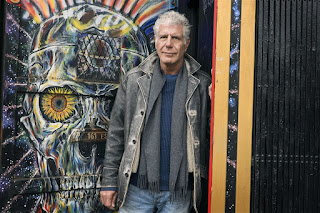 Some of chef/traveljournalist/provocateur  Anthony Bourdain’s most cherished possessions are set to
go up for auction online next month, with a portion of the proceeds going to benefit his alma mater the Culinary Institute of America.

Presented by Lark Mason Associates, fans of the late chef and Parts Unknown star will get to bid on some of his most valued belongings when the Property From the Collection of Anthony Bourdain sale goes live on October 9. The New Braunfels, Texas-based auction house will be selling 215 lots of items Bourdain acquired throughout his life, including artwork, books, furniture, watches and his chef’s knife.
Sixty percent of the proceeds from the auction will go to is Bourdain’s estranged wife, Ottavia Busia, and his daughter Ariane, according to the New York Times. (Bourdain and Busia were separated at the time of his death in June 2018). The rest will be donated to a new scholarship at the Culinary Institute of America created in the beloved chef’s name earlier this year. A joint effort between the school and Bourdain’s friends Eric Ripert and José Andrés, the scholarship is meant to help recipients pursue a semester abroad or take part in one of the school’s global cuisines and cultures programs.