It has been revealed that the potent Aston Martin DBS Superleggera will feature in the 25th James Bond film No Time To Die. 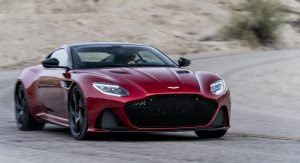 Back in June it was revealed that the film would include the iconic DB5, an original V8, and the new Valhalla hypercar and now the DBS Superleggera has been added to that list, making for one hell of a quartet.
The Aston Martin DB5 is perhaps the most famous James Bond car of them all and was previously driven by Daniel Craig during Skyfall. The Aston Martin V8 was previously featured in The Living Daylights. No Time To Die will mark the film debut of the DBS Superleggera and Valhalla.
Whereas Aston Martin is currently producing and delivering the DBS Superleggera to customers around the world, the same can’t be said about the Valhalla. In fact, the car is still in development after its shock premiere at the Geneva Motor Show earlier this year. We suspect the example featured in the film will be an early pre-production prototype with production-ready skin but a powertrain distinct from the eventual road car.
Clearly, the Valhalla will be the fastest car in the new film. Powering the eventual production model will be a turbocharged hybrid V6 engine with a total of 1000 hp. The car will feature an 8-speed, F1-inspired dual-clutch transmission and a limited-slip differential. It will be underpinned by a carbon fiber monocoque and weigh less than 1350 kg (2976 lbs) providing it with a power-to-weight ratio of 750 hp per tonne.
Posted by Michael A. D. Edwards at 11:18 AM