Charity: From Beds to Ward: Shaggy Clears the Air on Charity Show Proceeds

Chart-topping singjay Shaggy recounted the moment of getting "the call". 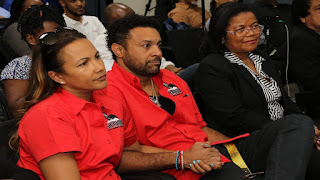 It was three days prior to his appearance in the Live Special of  "The Little Mermaid on Disney-ABC, in which he played Sebastian the crab.

"The call" was in relation to a Sunday Gleaner Front Page under the headline "Busta Still Waiting". The gist of the piece was that the hospital was yet to benefit from the J$100 million or so raised from the Shaggy & Friends concert.

“The concert was last year January and, in truth and in fact, we have been doing a whole lot of housekeeping and switching over a lot of things in terms of what our mandate is, and that kind of stuff internally with accountants and everything on our end.”

At a Press Conference held in the familiar confines of the Hospital Conference Room Monday afternoon, Shaggy added that the charity had grown from being a 'Mom n' Pop" type operation into a full-fledged, registered charitable organization, but even so had not taken on any personnel to match that growth, the organizational duties of the Show being handled by a small core of  close friends and longtime associates, He also made reference to a highly unusual (unprecedented, in fact) call from the Ministry of Health for him to attend a meeting to discuss the deployment of the funds

enter Kenny Benjamin, security services tycoon and new(?) hospital Chairman. Benjamin, who lead off the contributions to the presser, said the plan was to construct a new (3-storey) ward that would house up to 150 general beds, and not the 5 special ICU Beds that were the show's original target. This construction, he added would be undertaken in partnership with construction behemoth West Indies Home Contractors (WIHCON) as well as the National Health Fund (NHF)

And so, the 100 million or so which, as was demonstrated by a certified letter from bankers Bank of Nova Scotia, had remained in account since January 2018, will now go towards the construction of the new ward. The Grammy-winner emphasized that he would ALWAYS support the hospital, and that he had been doing so out of pocket for fully 8 years before the idea of the benefit concert, first held in 2009.


On an entertainment note, Shaggy dropped the gem that himself and Sting - who headlined that 2018 renewal - and with whom he had a Billboard chart-topping collaboration (44/876), will be mainstays of the ABC network's upcoming Christmas special, with an all-reggae set list to boot