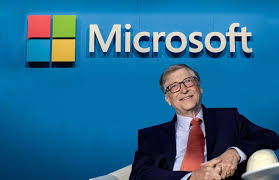 Bill Gates has regained the title of the richest person in the world, surpassing Amazon CEO Jeff Bezos Friday in the Bloomberg Billionaires Index.

Gates, the co-founder of Microsoft, has a net worth of $110 billion, which topped Bezos’ total worth of $109 billion, according to the index.

Gates briefly held the top spot last month after Amazon suffered a 28 percent drop in profits the three months ending in September, but quickly lost the spot again to Bezos, CNN reported.
Gates’ ascent to the top spot on Friday was spurred by a 48 percent increase in Microsoft shares, which lifted his net worth, according to CNN.

Bezos’ wealth was also impacted by his divorce settlement with his former wife MacKenzie. Their divorce settlement left her with 19.7 milion shares of Amazon.com valued at more than $38 billion, according to Bloomberg.
Posted by Michael A. D. Edwards at 11:43 AM