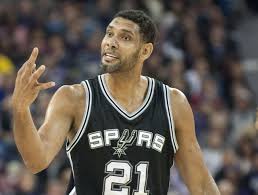 spending all 19 of his seasons with the team. A five-time NBA championship winner, Duncan, 40, won the Most Valuable Player award twice in his career and the Finals MVP award three times. The Spurs had a .710 winning percentage during Duncan’s tenure—the best 19-year stretch in NBA history and better than any NFL, NHL, and MLB team over the last 19 years.
Posted by Michael A. D. Edwards at 8:22 AM