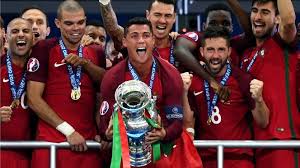 who ultimately made good with a heartbreaking 1-0 extra time victory over hosts and favourites France on Sunday.

The winning strike came of the boot of former Swansea man Eder (sentto Lille on loan, and recently made permanent - how they must be smiling now), after a hard challenge from Dmitri Payet saw star Cristiano Ronaldo stretchered off after a mere 24 minutes.

no doubt CR7 took it on himself to do some dressing-room "Gipper-style" motivation during the interval, and the Portuguese held off the hard-charging yet seemingly disorganized French for the rest of regulation. Greizman and Gignac each came agonizingly close for France, but, with despondence all around the once hopeful nation, it was the dreadlocked Eder who sealed the deal and sent the Iberians into ecstatic celebrations.

Eder afterwards indeed credited Ronaldo with motivation, saying thatthe superstar told him he was going to score the winning goal. Does this mean that Ronals will get a share of the goal for his clairvoyance? Nah, but he will surely, along with the rest of the team and manager Santos relish the reality of their first-ever Euro triumph and first major tournament win; it was also Portugal's first win against 'les Bleus" in 11 internationals.

Not bad for a team which practically crawled out of the group stage, third without a win to its name in the initial competition.

they now join the other "least-likelys", the Viking heroes of Iceland who, ironically, were dispatched by France in the last 8.