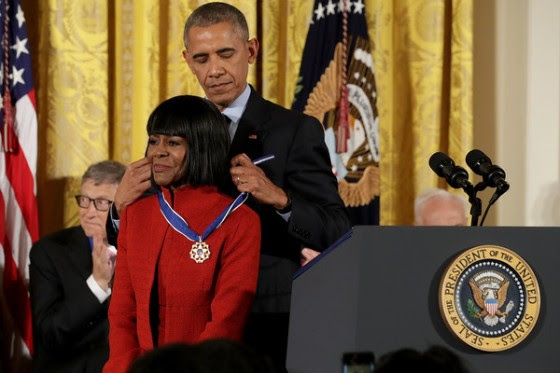 A report from News Americas Now.
Daughter of Nevisian immigrants, actress Cicely Tyson, was yesterday presented a Presidential Medal of Freedom by President Barack Obama at a star-studded event in the East Room of the White House.
“Everybody on this stage has touched me in a very powerful, very personal way,” Obama said at the event as he honored 21 luminaries including Tyson.
Honored along with the 91-year-old award-winning Caribbean roots actress were Michael Jordan, Bruce Springsteen, Tom Hanks, Robert De Niro, Diana Ross and  Kareem Abdul-Jabba among others.
Tyson was born and raised in Harlem, the daughter of Frederica, a domestic, and William Tyson, who worked as a carpenter, painter, and at any other jobs he could find. Her father arrived in New York City at age 21 and was processed at Ellis Island on August 4, 1919.
Tyson’s career began as a fashion model after she was discovered by a photographer for Ebony magazine. She then moved on to acting. Her first acting role was on the NBC series ‘Frontiers of Faith’ back in 1951. Her first film role was in ‘Carib Gold’ in 1956, but she went on to do more television work, such as the celebrated series East Side/West Side and the soap opera ‘Guiding Light.’
In 1961, Tyson appeared in the original cast of French playwright Jean Genet’s ‘The Blacks,’ the longest running off-Broadway non-musical of the decade, running for 1,408 performances. In 1966, she appeared with Sammy Davis, Jr. in the film ‘A Man Called Adam’ and starred in the film version of Graham Greene’s ‘The Comedians’ in 1967.
Tyson had a featured role in ‘The Heart Is a Lonely Hunter’ in 1968, and appeared in a segment of ‘Roots.’
In 1972, she was nominated for the Academy Award for Best Actress for her role in the critically acclaimed ‘Sounder.’ In 1974, she won two Emmy Awards for ‘The Autobiography of Miss Jane Pittman.’ Other acclaimed television roles included ‘King,’ in which she portrayed Coretta Scott King, ‘The Marva Collins Story,’ ‘When No One Would Listen,’ and ‘The Oldest Living Confederate Widow Tells All,’ for which she received her third Emmy Award.
In 1982, she was awarded the Women in Film Crystal Award for outstanding women, who through their endurance and the excellence of their work have helped to expand the role of women within the entertainment industry.
In 1988 she received a Candace Award for Distinguished Service from the National Coalition of 100 Black Women. In 1991 she appeared in ‘Fried Green Tomatoes’ as Sipsey. In her 1994–95 television series ‘Sweet Justice,’ Tyson portrayed a civil rights activist and attorney named Carrie Grace Battle, a character she shaped by reportedly consulting with noted Washington, D.C. civil rights and criminal defense lawyer Dovey Johnson Roundtree.
In 2005, Tyson co-starred in ‘Because of Winn-Dixie’ and ‘Diary of a Mad Black Woman.’ The same year she was honored at Oprah Winfrey’s Legends Ball. The Cicely Tyson School of Performing and Fine Arts, a magnet school in East Orange, New Jersey, was renamed in her honor. She plays an active part in supporting the school, which serves one of New Jersey’s most underprivileged African-American communities.
In 2010, she narrated the “Paul Robeson Award”-winning documentary, ‘Up from the Bottoms: The Search for the American Dream.’
In 2010, she appeared in ‘Why Did I Get Married Too? and in 2011, Tyson appeared in her first music video in Willow Smith’s ‘21st Century Girl.’ That same year she played Constantine Jefferson in ‘The Help.’
At the 67th Tony Awards on June 9, 2013, Tyson won the Tony Award for Best Actress in a Play for her performance as Miss Carrie Watts in ‘The Trip to Bountiful.’ She also won the Drama Desk Award for Outstanding Actress in a Play and the Outer Critics Circle Award for Outstanding Actress in a Play for the role.
On May 21, 2014, she was awarded an honorary Doctorate of Humane Letters from Columbia University and in 2015, she was honored among the Kennedy Center Honorees. On May 7, 2016, she was awarded an honorary Doctorate of Letters from Howard University alongside President Barack Obama.
In 2013, Tyson was greeted after her performance in the Broadway production of Trip to Bountiful by Mark Brantley, Deputy Premier of the Caribbean island of Nevis, the birthplace of Ms. Tyson’s parents.
Tyson was married only once – to legendary jazz trumpeter Miles Davis on November 26, 1981. The couple divorced in 1988.
Posted by Michael A. D. Edwards at 6:04 AM