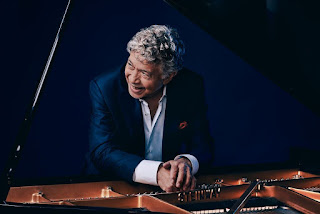 With a near inexhaustible list of major-league A-list credits - from the late Natalie Cole to the ageless Tony Bennett, an annual Jazz festival named after him in Maryland since 2010, and a listing in the Top 5 of Hal Leonard's 50 Greatest Jazz Pianists of all Time(2005), Monty Alexander might be forgiven for not being seen more often in his homeland.

But a decade-long wait comes to an end next month as Alexander, with is critically-acclaimed fusion project, The Harlem-Kingston Express, rolls into Kingston - on Dec 11 - in  benefit concert titled "Home For Christmas" in aid of the Global Giving Programme of the university of the West Indies. The show unfolds at the Jamaica Pegasus beginning at 7:00pm. The performance is under the Patronage of former Jamaican Prime Minister P J Patterson, who as former manager of the legendary Skatalites is certainly familiar with Alexander's oeuvre and development, and UWI Vice-Chancellor, Sir Hilary Beckles.

The affable and often effervescent pianist will continue his genre-bending explorations of the sounds of  his beloved homeland (mento, ska and reggae) and the swing stylings that established him in the US and caught the pleased ear of "Chairman of the Board" the late Frank Sinatra, who in turn was instrumental in  getting Alexander residency in America.

Of course, no one venue or event could contain the pianist's vast and still-growing discography, but patrons can expect him to expertly weave through his myriad associations - including a variety of combos with iconic Jamaican guitarist Ernie Ranglin and longtime trio partners Hassan Shakur (bass) and Herlin Riley (drums) as well as reggae stalwarts Glenn Browne and Courtney Panton.